IDE stands for Integrated Development Environment is defined as a coding tool that helps to automate the process of editing, compiling, testing, etc. in an SDLC and it provides ease to the developer to run, write and debug the code.

It is specially designed for software development that consists of several tools which is used for developing and testing the software.

There are some Python IDEs which are as follows: 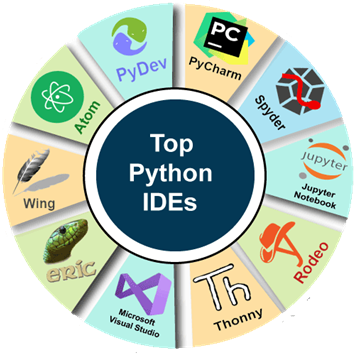 PyCharm was developed by the Jet Brains, and it is a cross-platform Integrated Development Environment (IDE) specially designed for python. It is the most widely used IDE and available in both paid version and free open-source as well. It saves ample time by taking care of routine tasks.

It is a complete python IDE that is loaded with a rich set of features like auto code completion, quick project navigation, fast error checking and correction, remote development support, database accessibility, etc.

Spyder is an open-source that has high recognition in the IDE market and most suitable for data science. The full name of Spyder is Scientific Python Development Environment. It supports all the significant platforms Linux, Windows, and MacOS X.

PyDev is defined as one of the commonly used Python IDE, which is an external plugin for Eclipse. It is a natural choice of the Python developers that are coming from the Java background and very popular in the market as Python interpreter.

Aleksandar Totic is famous for his contribution to Mosaic browser and worked on Pydev project during 2003-2004.

Atom is developed by GitHub, which is initially started as an open-source, cross-platform. It is based on a framework, i.e., Electron which enables cross-platform desktop application using Chromium and Node.js and generally known as "Hackable Text Editor for the 21st century".

It is defined as a cross-platform IDE that is packed with necessary features and with decent development support. Its personal edition is free of cost. The pro version comes with a 30 days trial for the developers to try it out.

It has several features that include auto-completion, syntax highlighting, indents, and debugging.

Jupyter is one of the most used IPython notebook editors that is used across the Data Science industry. It is a web application that is based on the server-client structure and allows you to create and manipulate notebook documents. It makes the best use of the fact that python is an interpreted language.

Thonny is another IDE which is best suited for learning and teaching programming. It is a software developed at the University of Tartu and supports code completion and highlight syntax errors.

Rodeo is defined as one of the best IDE for python that is most widely used for data science projects like taking data and information from different resources.

It supports cross-platform functionality and provides auto-completion of code.

Microsoft Visual Studio is an open-source code editor which was best suited for development and debugging of latest web and cloud projects. It has its own marketplace for extensions.

The Eric Python is an editor which is developed in Python itself and can be used for both professional and non-professional work.