Difference between TypeScript and Dart

Dart is an open-source, general-purpose, class-based, object-oriented language with C-style syntax which can optionally transcompile into JavaScript. It is used to build mobile, desktop, and web applications. It supports various programming concepts like interfaces, classes, collections, generics, mixins, and optional typing. It was developed by Google and later approved as a standard by ECMA group. The original release of Dart was in November 2013.

Dart can be used to create single-page applications, which apply only to websites and web applications. Single-page applications enable navigation between screens of the website without loading a different webpage in the browser. A classic example is Gmail. In Gmail, when you click on a message in your inbox, browser stays on the same webpage, but JavaScript code hides the inbox and brings the message body on the screen.

TypeScript is an open-source pure object-oriented programing language. It is a strongly typed superset of JavaScript which compiles to plain JavaScript. TypeScript is developed and maintained by Microsoft under the Apache 2 license. It is not directly run on the browser. It needs a compiler to compile and generate in JavaScript file. TypeScript source file is in ".ts" extension.

We can understand the main differences between TypeScript and Dart from the below table. 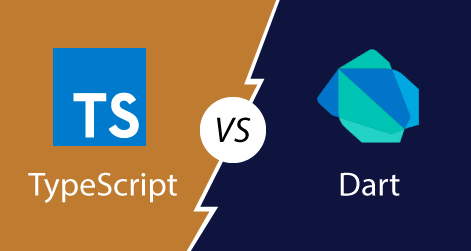