Inheritance in Java is a mechanism in which one object acquires all the properties and behaviors of a parent object. It is an important part of OOPs (Object Oriented programming system).

Inheritance represents the IS-A relationship which is also known as a parent-child relationship.

Why use inheritance in java

The syntax of Java Inheritance

The extends keyword indicates that you are making a new class that derives from an existing class. The meaning of "extends" is to increase the functionality.

In the terminology of Java, a class which is inherited is called a parent or superclass, and the new class is called child or subclass. 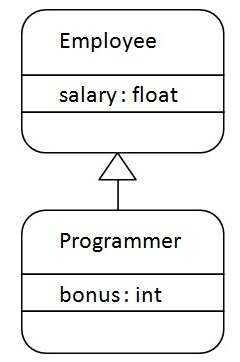 As displayed in the above figure, Programmer is the subclass and Employee is the superclass. The relationship between the two classes is Programmer IS-A Employee. It means that Programmer is a type of Employee.

In the above example, Programmer object can access the field of own class as well as of Employee class i.e. code reusability.

Types of inheritance in java

On the basis of class, there can be three types of inheritance in java: single, multilevel and hierarchical.

In java programming, multiple and hybrid inheritance is supported through interface only. We will learn about interfaces later. 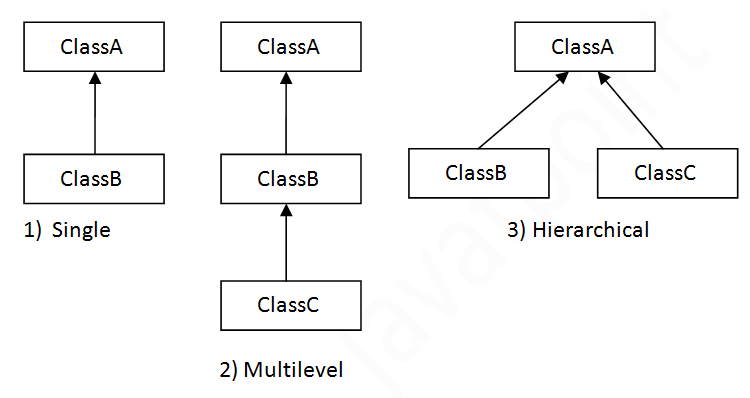 Note
Note: Multiple inheritance is not supported in Java through class.

When one class inherits multiple classes, it is known as multiple inheritance. For Example: 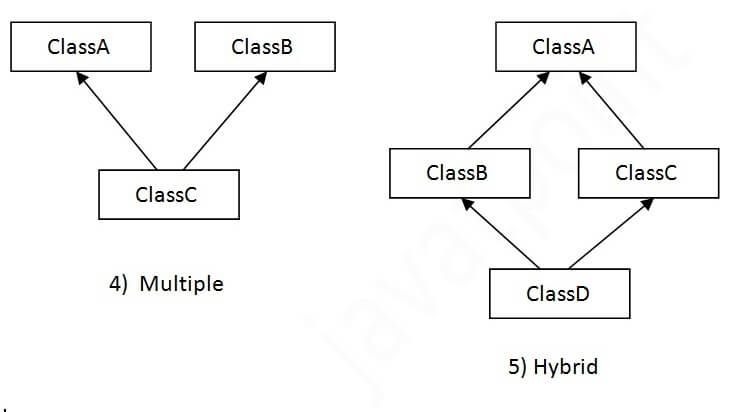 Q) Why multiple inheritance is not supported in java?

To reduce the complexity and simplify the language, multiple inheritance is not supported in java.

Consider a scenario where A, B, and C are three classes. The C class inherits A and B classes. If A and B classes have the same method and you call it from child class object, there will be ambiguity to call the method of A or B class.