XQuery is a functional query language used to retrieve information stored in XML format. It is same as for XML what SQL is for databases. It was designed to query XML data.

XQuery is built on XPath expressions. It is a W3C recommendation which is supported by all major databases.

The as it is definition of XQuery given by its official documentation is as follows:

"XQuery is a standardized language for combining documents, databases, Web pages and almost anything else. It is very widely implemented. It is powerful and easy to learn. XQuery is replacing proprietary middleware languages and Web Application development languages. XQuery is replacing complex Java or C++ programs with a few lines of code. XQuery is simpler to work with and easier to maintain than many other alternatives." 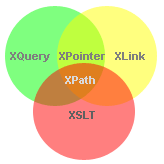 What does it do

XQuery is a functional language which is responsible for finding and extracting elements and attributes from XML documents.

It can be used for following things: