Selenium WebDriver is the most important component of Selenium Tool's Suite. The latest release "Selenium 2.0" is integrated with WebDriver API which provides a simpler and more concise programming interface.

The following image will give you a fair understanding of Selenium components and the Test Automation Tools. 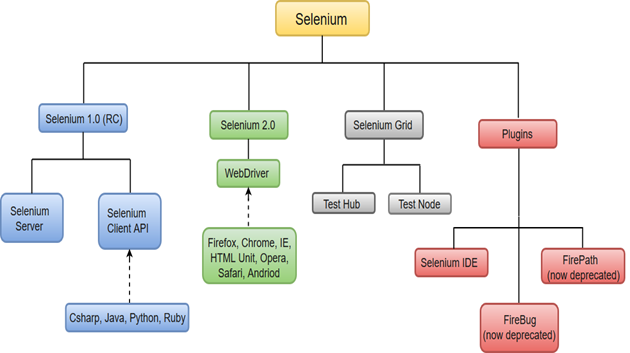 Selenium WebDriver was first introduced as a part of Selenium v2.0. The initial version of Selenium i.e Selenium v1 consisted of only IDE, RC and Grid. However, with the release of Selenium v3, RC has been deprecated and moved to legacy package.

In WebDriver, test scripts can be developed using any of the supported programming languages and can be run directly in most modern web browsers. Languages supported by WebDriver include C#, Java, Perl, PHP, Python and Ruby.

Before learning the concepts of Selenium WebDriver, you should be well versed with any of the supported programming languages. Currently, Selenium Web driver is most popular with Java and C#. For this tutorial, we are using Selenium with java. You can refer to the links given below to learn basic as well as advance concepts of Java and C#:

Selenium WebDriver performs much faster as compared to Selenium RC because it makes direct calls to the web browsers. RC on the other hand needs an RC server to interact with the browser.

WebDriver has a built-in implementation of Firefox driver (Gecko Driver). For other browsers, you need to plug-in their browser specific drivers to communicate and run the test. Most commonly used WebDriver's include:

The following image shows the architectural representation of Selenium WebDriver.

There are four basic components of WebDriver Architecture:

Selenium developers have built language bindings/Selenium Client Libraries in order to support multiple languages. For instance, if you want to use the browser driver in java, use the java bindings. All the supported language bindings can be downloaded from the official website (https://www.seleniumhq.org/download/#client-drivers) of Selenium.

JSON (JavaScript Object Notation) is an open standard for exchanging data on web. It supports data structures like object and array. So, it is easy to write and read data from JSON. To learn more about JSON, visit https://www.javatpoint.com/json-tutorial

Selenium uses drivers, specific to each browser in order to establish a secure connection with the browser without revealing the internal logic of browser's functionality. The browser driver is also specific to the language used for automation such as Java, C#, etc.

When we execute a test script using WebDriver, the following operations are performed internally.

Some of the most important features of Selenium WebDriver are: 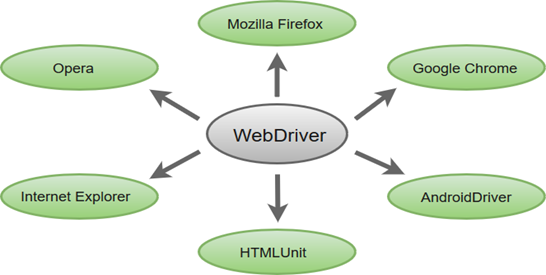 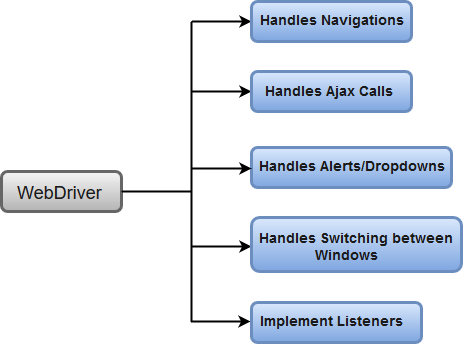