The most common bugs related to pointers and memory management is dangling/wild pointers. Sometimes the programmer fails to initialize the pointer with a valid address, then this type of initialized pointer is known as a dangling pointer in C.

Dangling pointer occurs at the time of the object destruction when the object is deleted or de-allocated from memory without modifying the value of the pointer. In this case, the pointer is pointing to the memory, which is de-allocated. The dangling pointer can point to the memory, which contains either the program code or the code of the operating system. If we assign the value to this pointer, then it overwrites the value of the program code or operating system instructions; in such cases, the program will show the undesirable result or may even crash. If the memory is re-allocated to some other process, then we dereference the dangling pointer will cause the segmentation faults. 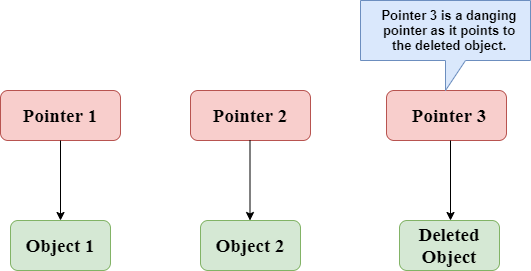 Let's understand the dangling pointer through some C programs.

The statement int *ptr=(int *)malloc(sizeof(int)); will allocate the memory with 4 bytes shown in the below image:

The statement free(ptr) de-allocates the memory as shown in the below image with a cross sign, and 'ptr' pointer becomes dangling as it is pointing to the de-allocated memory.

If we assign the NULL value to the 'ptr', then 'ptr' will not point to the deleted memory. Therefore, we can say that ptr is not a dangling pointer, as shown in the below image:

Variable goes out of the scope

When the variable goes out of the scope then the pointer pointing to the variable becomes a dangling pointer.

In the above code, we did the following steps:

Now, we will see how the pointer becomes dangling when we call the function.

In the above code, we did the following steps: 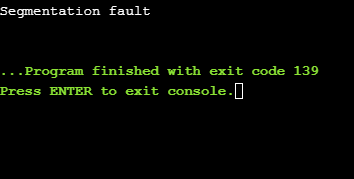 Let's represent the working of the above code diagrammatically. 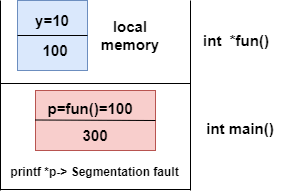 Let's consider another example of a dangling pointer.

The above code is similar to the previous one but the only difference is that the variable 'y' is static. We know that static variable stores in the global memory.

Now, we represent the working of the above code diagrammatically.

The above diagram shows the stack memory. First, the fun() function is called, then the control moves to the context of the int *fun(). As 'y' is a static variable, so it stores in the global memory; Its scope is available throughout the program. When the address value is returned, then the control comes back to the context of the main(). The pointer 'p' contains the address of 'y', i.e., 100. When we print the value of '*p', then it prints the value of 'y', i.e., 10. Therefore, we can say that the pointer 'p' is not a dangling pointer as it contains the address of the variable which is stored in the global memory.